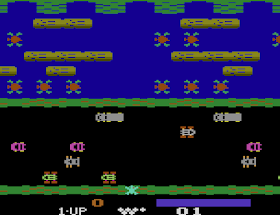 Genre: Action
Perspective: Top-down
Visual: Fixed / Flip-screen
Gameplay: Arcade
Published by: Parker Brothers
Developed by: Konami Industry Co.
Released: 1983
Platforms: Atari 2600, PlayStation (PSX, PS1)
The goal - to help the frog to cross the game screen from the bottom to the top. the game field is divided into 13 rows: first row - starting line, from the second to the sixth - the road on which the different speeds in both directions drive cars, the seventh - a safe area for respite from the eighth to the twelfth - the river with floating left logs , otters and crocodiles and turtles groups from right to left, in addition to the logs can be provided by snakes and spiders. In the thirteenth, the last row, is located five cells. Frog must overcome the road, move on logs and turtles through the river and take one of the five locations. To complete a stage, you have to take the frogs alternately all five cells, and then automatically begins a new stage with more dense traffic and fast, with faster river with a lot of enemies.
Also, sometimes there are bugs on logs or-female frogs, which are awarded for collecting bonus points.
The player is given to the direct management of a frog, moving it with the help of four buttons on the playing field (forward-backward, left-right).
Frog die if ends allotted to each stage time, as well as in a collision with a car, a crocodile, an otter, a spider or a snake, when falling into the water when you jump past the finish of the cell or if a log or turtle, on which sits a frog swims beyond screen. The end of the game there, after each stage begins a new, more complex. The final goal of the game can be called to achieve the greatest number of points. The highest result of an officially registered to date is considered to be 896 980 points. The record put American Pat Laffaye January 1, 2010.
‹
›
Home
View web version