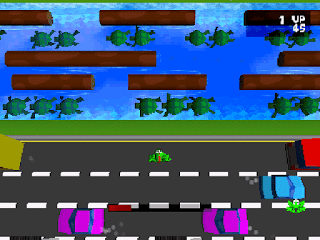 Genre: Action
Perspective: Top-down
Gameplay: Arcade, Platform
Published by: Hasbro Interactive
Developed by: Millennium Interactive Ltd.
Released: 1997
Platforms: PlayStation (PSX, PS1), Atari 2600
The fate of this cute Frog has turned out well, for a long time he has been traveling on TV screens and computer monitors and always with constant success, and now he has taken root on the PlayStation! The game is based on an arcade hit from the 80s. The main elements of the game, which have become classic, have been saved, as well as numerous additions have been made that have significantly modernized the game. The task seems to be traditional - to get from point "A" to point "B". Only now this has been done in three-dimensional graphics, and besides the road and the river, many new elements have appeared. The principles of control in the game are completely preserved, but they are simple and effective, so if this is your first meeting with Frogger, it will not cause you any difficulties. Now the game has 40 original levels, performed in various (nine!) Graphic zones. Challenging puzzles with switches, exploding barrels, crushers, plants, frog eaters and a bunch of other novelties that have significantly expanded the horizons of the classic scenario await you.
The game starts with classic retro levels that almost everyone knows and loves. This is actually a kind of training "clearing" and preparation for more difficult situations. The "heavenly" levels with flying up and falling balls, biplanes and clouds are very difficult. Desert levels are just a hurricane! Awesome landslides and vile vultures!
The game in the mode of 2 or more players is especially exciting, it is simply impossible to tear yourself away. And, in conclusion, let's reveal a little secret - there are Golden Froglets in the game! You will find and collect them all - at the end of the game you will find just a stunning surprise!
For those who have never met Frogger before, I will outline what you have to do. You are a frog, all you can do is jump (direction buttons) and croak and, oddly enough, you can’t swim at all. Once in the water (as well as under a car, lawn mower, etc.), you die and lose your precious life. You jump through the levels in search of your kids and various bonuses. Moreover, you have a very limited time to search. If you find all the frogs, then the level is passed. But a variety of obstacles prevent you from doing this.
‹
›
Home
View web version