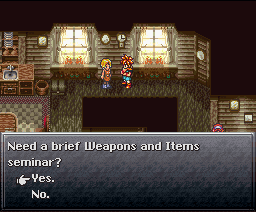 Genre: Role-Playing (RPG)
Perspective: Top-down
Art: Anime / Manga
Gameplay: Japanese-style RPG (JRPG)
Setting: Fantasy, Sci-Fi / Futuristic
Turn-based: Turn-based
Published by: Square Soft
Developed by: Square Co.
Released: 1995
Platforms: Super Nintendo (SNES), Nintendo DS (NDS)
The development of the game was led by a group of three famous game designers, named Square Co. «Dream Team». The team included: the creator of the game series Final Fantasy, Hironobu Sakaguchi, the creator of the game series Dragon Quest Yuji Horia and manga Akira Toriyama, who also participated in the creation of almost all games of the Dragon Quest series as a character designer. The producer of the game was Kazuhiko Aoki. Most of the script was written by Masato Kato; A significant part of the musical accompaniment was created by Yasunori Mitsuda, but due to illness he transferred the right to finish this work to the composer Nobuo Uematsu, the more famous musical accompaniment to the games of the Final Fantasy series.Chrono Trigger thanks to a brilliant non-linear plot, careful study of characters and the world, beautiful music and remarkable for those times graphics is rightfully considered one of the best games of the console. The game was highly appreciated by game criticism. Sales of the original version of the Chrono Trigger reached 2.36 million copies in Japan and 290,000 beyond, the remake game sales for the Nintendo DS console exceeded 0.9 million copies worldwide.

In the Chrono Trigger seven game characters belonging to different time periods. Three of them - Chrono, Marl and Lucca - came from the "present" - 1000 AD. E. On the internal chronology of the game, others - either from the past or from the future.
Crono, Yap. is a teenager living with his mother; Despite his young age, he is a good fighter, desperately brave and reckless, unable to leave a friend in trouble.
Marle, yap. - Princess, daughter of the King - the ruler of the country Guard, in which all three live; She is greatly burdened by her high position and escapes from the castle, posing as an ordinary resident of the Guards.
Lucca is a young, inventive creature obsessed with technical creativity, whose failed teleportation installation opens the first portal in time.
As time travels, new companions join the heroes:
Frog is a valiant and gallant knight from the Middle Ages (600 AD), turned magician Magus into an anthropoid frog, but not lost the ability to hold a sword in his hands.
Robo is a robot trying to find human feelings from a far future (2300 AD).
Ayla - a warrior girl from the Stone Age, who protects her people from dinosaurs.
And the magician himself and the demon-lord Magus - turned out to be, in fact, the same traveler in time. Unlike the previous characters, which are added to the plot of the plot, Magus can be killed, or simply do not meet with him.
Simultaneously, the player controls not more than three characters; Replacements in the active troika can be made through a special menu at any time of the game, except for fights. Unlike many Japanese role-playing games, in Chrono Trigger this restriction is explained: the "time saving theorem" when traveling through the Gate of too many travelers sends them to the point with the least "resistance" of space-time - The End of Time. Therefore, at the same time, no more than three people can travel in time. At the same time, it is worth remembering that the experience from the battles is received by everyone in the team, and not only the allocated three, but the tech points are received only by the characters who took part in the battle.

The action of the Chrono Trigger unfolds in a world reminiscent of the Earth, and passes through the seven time epochs of its existence - from the earliest times (the Stone Age) to the indefinitely distant (End of Time). In addition, there is a timeless location - Black Omen. The games Radical Dreamers and Chrono Cross, which take place in areas of the same world (Regionnoe and El Nido), not shown in the original Chrono Trigger, imply that the planet is larger than it was shown in the Chrono Trigger. The game uses its own internal chronology - the so-called "Guardia Timeline" (English Guardia Timeline), reminiscent of the historical chronology of Scaliger adopted in our world by the count of B.C. And A.D. The game begins in 1000 AD. E.The ideology of time travel in Chrono Trigger does not recognize temporary paradoxes - any activity of a time traveler leads to a change in history, and only the memories of the traveler remain the only evidence of the existence of the previous time line. Therefore, the plot of the game is built around the attempts of the heroes to "fix" the history of their world in every possible way; Although they make a lot of side "corrections", their main goal remains "breaking" from the history of the most tragic of its time - the destruction in 1999 n. E. Almost all living things on the planet by a monstrous, almost omnipotent being called Lavos.The Stone Age (65,000,000 BC) - at this time, according to Chrono Trigger, the first people are forced to coexist with dinosaurs, including sensible and aggressive Reptites. The continents did not split at that time, representing a single whole - Pangea. Reptiles live in several fortified fortresses, in particular, Reptite Lair and located in the mouth of the volcano Tyrano Lair. The people whom the Reptiles call "monkeys" are divided into two tribes: led by Ayla and the openly living tribe of Ioka in the plain and the Laruba tribe hiding in the primitive jungles. The tribe of Laruba has learned to tame pterodactyls and fly on them.
‹
›
Home
View web version