The Flintstones: The Surprise at Dinosaur Peak! (NES) 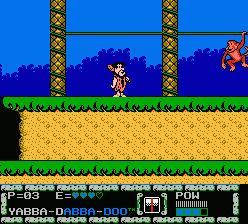 Genre: Action
Perspective: Side view
Visual: 2D scrolling
Gameplay: Platform
Setting: Prehistoric
Published by: Taito America Corporation
Developed by: Taito Corporation
Released: 1994
Platform: Nintendo (NES)
The second game based on the "Flintstones", in no way inferior to the first. Here, Fred and his friend Barney rescues children from the disaster. You can play for two characters, switching from one to another by pressing the "SELECT". Heroes like complement each other, that is, to each have their weapons (Fred - baton, Barney - slingshot). And abilities (eg, Barney clings to the bar, and Fred not). New stage surprise with new secrets and interesting design. Unusual enemies have become sophisticated in terms of design and aggressiveness in combat. Graphics, like the last part of the game, is famous for its pleasant colors and even became a little better. In this project, the color palette contains more vivid colors, compared to The Flintstones - The Rescue of Dino & Hoppy. Game The Flintstones, - The Surprise at Dinosaur Peak bright and exciting time for its passage will fly as one minute.
An additional life: During the game you need to collect asterisks, and as they become more and more, the letters at the bottom of the screen will change their color. When all the letters change color, get an extra life.

Once all the letters at the bottom of the screen (as stars are found) change color, you will get extra life.
1st level: When you meet the dragon's head, wait until it stops exhaling and then climb onto the next ledge. The alien Gaza will give you advice on how to find the ledge.
2nd level: Barney needs to stand on the mouth of the crocodile, jump high and move to the next shore. Strike the battleship into the water. In the battle with triceratrops, apply three hits of maximum power. In case you win, get the first gem. After passing this level, you can play hockey, you control Fred for thirty seconds, the rest thirty - Barney.
3rd level: Traveling on a stone trailer, you need to jump off at the end. In the battle with Pithecanthropus, beat off the stones falling from above, with a large club, so that they fall into your opponent. Victory will bring another precious stone. Here, in the cave, there is a place where you can collect a lot of stars. Go to the passage, which is closed by four stones, break the two lower ones.Climb up and stand on the top stone. Choose Barney, jump on the rope, climb and go right.
4th level: River swim on the board. Use the heads of sharks as a springboard. Jump over the fish. At the second level there is a stone wheel. Remove it from the brake, climb onto it, and it will take you up. When you see the top of the mountain, jump from the wheel to the top and get to the prize level.
5th level: You can get the third gem if you help the businessman get rid of the monkeys that are hindering him. When you reach the dinosaurs, hit the club with a club, and the dinosaurs will push your belly to the other side of the cliff. You will be given a chest with breakfast from the mammoth, filling the life by pressing Up and B. Once at the place where you need to go through the thorns, hit the club with a stick, and the big wheel will fall. Jump on it and move your legs in the opposite direction to the wheel side, then at the right moment, jump off and cling to the ledge. In the battle with the big monkey, you can pick out the nuts that it throws.
6th level: At the end of the level, a giant spider awaits you. Victory over him will give you the fourth gem. After this battle you can play basketball.
7th level: The fifth gem you can get in the cave of the witch. In order to open the door at the end of a room, Fredy must hang on a special lever. Beware of large pots and mirrors, from where sometimes ghosts fly out. They can only be stopped for a while. In a fight with a sorceress, strike her before she can use magic.
8th level: Here you will find a pterodactyl. For five precious stones, he will take you to the middle of the volcano. Use your assistant's ability to spit stones (B or Turbo B) spitting, as some of them contain stars.
9th level: At the very top of the volcano you will have to face the son of the Fire-breathing dragon. Beat him with a slingshot and stone axes. Having deafened it, go to the crater of the volcano.
10th level: The initial part of the path let Barney pass: he is below Fredy and will not touch his head with thorns. With a club, break two rocks rolling behind you. The stone should fall down and half dive into the lava. Jump to him and go on. At the meeting throw the Pithecanthropus with balls from the bowling alley, which will be next to the barrel. Then Barney needs to stand on the tail of a lizard, throw a ball on her head. High flying up. You will find yourself in a bonus where there are many asterisks. Then you have to climb to the very top before you are overtaken by lava. You will also be pursued by a fiery wheel. Again you will have to stun the son of the Fiery dinosaur. Finally, a meeting with the mistress of the volcano - Fire-breathing dinosaur. Beat her thoroughly on the head, and she will stop the lava.
‹
›
Home
View web version