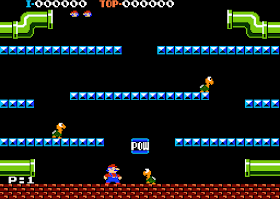 Genre: Action
Perspective: Side view
Visual: Fixed / Flip-screen
Gameplay: Platform
Published by: Nintendo of America Inc.
Developed by: Nintendo Co.
Released: 1983
Platforms: Nintendo (NES), Arcade Machine
The game of all time. It is known almost as well as Battle City, and many Nintendo manned cartridge with this game. The story is elementary - playing for the Mario Brothers, you have to clear the level of all creatures (crabs, turtles, flies, etc.). Get rid of the enemy you will be able, if the stun him with a bottom (some several times), and then run into the platform. Have fun, and not a bit annoying.

The control system in this game is very simple. You move the character using the buttons on the D-pad; And you perform jumps by pressing the A button.
The goal of each level is to destroy all enemies. To do this, you need to attack the platform on which the enemy is located, and the blow must be so strong that it crashes onto the back, then run up and kick it. However, if you do not have time to kick quickly enough, then he immediately wakes up and this time will act faster, and it will be much harder to defeat him. If the enemy touches you and does not lie on the ground, lying on your back, you will lose your life. And the game begins when you have only 3 lives, and as soon as you destroy all the enemies on the level, go to the next level. At every third level you are given a prize round, where you can earn points.

This is the basis of the whole game, and you earn points for collecting coins, destroying enemies. In this case, if you want to show the level of results on the level, you need to act very carefully and know how many points and for what you got:
‹
›
Home
View web version