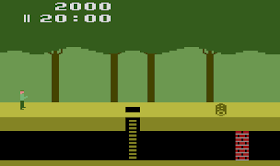 Genre: Action
Perspective: Side view
Visual: Fixed / Flip-screen
Gameplay: Arcade, Platform
Published by: Activision
Developed by: Activision
Released: 1982
Platform: Atari 2600
All of the screens in the game 255. All screens are decorated in the same jungle style. Manage have an adventurer named Pitfall Harry. Goal of the game - in the allotted 20 minutes to collect all 36 screens spread out on treasure (gold bullion, money bags and rings with precious stones), which interfere with many obstacles and enemies.
Variety of enemies and obstacles are not different, it can be: rolling from right to left, or lying on the ground the logs, bottomless, or water-filled pit that is either constant located on the center of the screen, or from time to time disappear (on most holes swinging vines needed to overcome abysses, in the water wells may be crocodiles, to overcome such pits have to wait until the crocodiles mouth and slam proprygat them through the water), fires, standing in one place for snakes and scorpions crawling over the player. Some enemies / obstacles kill the hero at the slightest touch (scorpions, snakes, crocodiles, the abyss), other (logs) only selected points are credited for the collected treasures.
Each screen is divided horizontally into two levels: the upper - and lower surface of the earth - the underground passages. The lower level is much safer, but there may be encountered insurmountable obstacles, because of which have to come back, losing precious time. In addition, traveling to the lower level, you can slip screens, on the one hand accelerates the promotion, on the other - increases the chance to miss the necessary for the passage of the treasure. To go from level to level on some screens located failures and stairs.
‹
›
Home
View web version