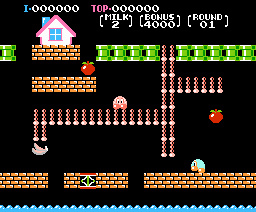 Genre: Action
Perspective: Side view
Visual: Fixed / Flip-screen
Gameplay: Arcade, Platform
Published by: Hudson Soft Company
Developed by: Hudson Soft Company
Released: 1984
Platform: Nintendo (NES)
Is one of the first game for Nintendo, released back in 1984. Nuts & Milk is an entertaining arcade game in which you have to assume the role of a pink semi-circular creature (milk) and, running away from the green “nuts” forms like it, get to the beloved protagonist after collecting a full set of fruits.
Running and jumping on the platforms and climbing the ropes, you will need to avoid clashes with nuts in every way, while collecting fruits that will open the house of the beloved main character. When the house opens, you will only need to get to your beloved, again bypassing the enemies. Although the game is quite simple in terms of gameplay and plot, all it will make you sweat. It is quite fascinating, because it will cheer you up well until you complete all 50 levels.
‹
›
Home
View web version