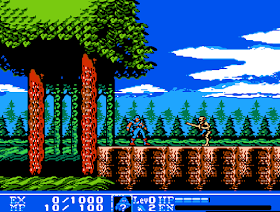 Genre: Action
Perspective: Side view
Visual: 2D scrolling
Gameplay: Beat 'em up / Brawler, Martial Arts
Setting: Fantasy
Published by: Taito America Corporation
Developed by: KID Corp.
Released: 1992
Platform: Nintendo (NES)
The story describes the adventures of Thonolan, a young martial artist, went in search of the evil sorcerer, to avenge his murdered brother, and rescue a kidnapped princess. During the game the hero by killing enemies, gain experience and get new skills. The gameplay is reminiscent of games like Power Blade, Castlevania and Ninja Gaiden. The player character leads in eight locations, including even some pretty exotic places like the deck of the ship, and the passage of each location bout ends with one or more bosses. With kicks and magical artifacts protagonist wins along the way opponents.
The game has received positive reviews from the gaming press for a well-designed graphics, but the big players 'attention to themselves are not attracted because it came after the start of sales of SNES and SEGA Genesis / Mega Drive - next-generation consoles and the players' attention was drawn capabilities of 16-bit games.

Thonolan - the youngest of martial arts ever honored with this title. Instead, to become one of the Knights of the King, his brother Makram, Tonolan chose to stay with his old teacher Tasdana and continue their education.
Everything goes on as usual, until one day suddenly arrives seriously wounded macro and tells the horrifying story. The King and Queen massacred, Princess Silphee kidnapped and killed all the knights of King. Spiteful warlock Belzed with his army of nightmarish creatures treacherously attacked their kingdom Laurel. And now all hope was only on Thonolan.
Macro and Tonolan go on a long journey to avenge Belzed and free the princess. Brothers begin their campaign in the Witch Forest, on the outskirts of the kingdom Laurel. But the first battle against the skeletons - Belzed evil soldiers - wounded Macro dies. Dying, he pleads Tonolana use their knowledge in the martial arts to rescue the princess. Tonolan, shaken by the death of his brother, vows to retaliate for the death of Belzed macro.
So Thonolan was one-on-one with hordes Belzed. On his way he fought the mighty witch Druilla, in a battle with the magic that won Thonolana magic witch. In the caves, he defeated Wolves rider in the First Castle Belzed Thonolan struggled with cruise leader and then another, with many horrible monsters. However, fighting skills and tenacity have helped Thonolan Belzed reach and destroy it. And after his death Tonolan, with the rescued Princess Silphee on his hands, with the help of magical wings flew home to his native kingdom Laurel.

The player controls Thonolan, the protagonist of the game. The screen moves only forward, thereby denying the player the freedom to choose the direction of movement and the possibility of returning to the visited locations previously. In the beginning it only three options available to kick (regular, low and blow up). As you progress through the game, the hero can learn new techniques, increasing your level and learn different magic spells. Increased recruitment takes place a certain number of specific points given by the collection of magical artifacts that fall from killed enemies. Items usually falls three, but they disappear pretty quickly, and therefore, the player rarely has time to grab all three subjects.

Control of the game was created with the expectation of a standard game controller NES. The arrows controls the direction of movement of the character (forward or backward) direction of attack (up or down), and it can help run a variety of kicks.
Button «A» is responsible for the character jump button «B» - for the kick. The button «Start» suspends the game on pause, causing the screen to select the magic spells (the choice of which is carried out by pressing the «A»). The button «Select» activates the selected spell (for some offensive spells provides the possibility of adjusting the direction of the attack with the help of the cross).

At the bottom of the game screen displays two counters: EX (Experience) and MP (Magic Power). Experience has shown the number of points earned by the player and the number of points needed to reach the next level (this occurs when a set of 1000 points). Counter growing experience in the capture of specific artifacts, called Experience Awards.
The counter shows the number of magical power of magic points available to use magic spells, as well as the maximum possible number of magic points (equal to 100 points). Each time you cast spends a certain amount of magic points. At the beginning of the game counter zero and is growing in the capture of specific artifacts, known as MP Bottles.
The picture to the right of counters displays the character spells of the currently selected. By default, or in the absence of the selected spell is displayed with a question mark.
Parameter Lev, located to the right shows the current level of experience of the character. The number next to the head Tonolana displayed below indicates the number of remaining lives of the characters. At the beginning of the game character has two spare lives, but the death of the character of their number decreases.
Counter HP (Hit Points) shows the current level of the character's health. Each time, when the enemy strikes a character, a strip of counter decreases. Counter growing in the capture of specific artifacts in the form of heart or using spells Life Up. When you reach a new level to the maximum value of the counter is added to another division, but the level of health is not compensated.
Counter EN (Enemy) shows the current health of the enemy. Counter is designed to display health bosses and levels filled only at a meeting with them.

Music for the game was written by two composers: Nobuyuki «Shiochan» Shioda and Takahama (in the credits listed as «Takaha»). The official soundtrack was never published, but available on the Internet compositions (copyright infringement), obtained directly from the image of the game cartridge. In 2010 the Russian artist FamicomBit recorded a cover version of the mix of several musical themes of the game. A cover version became a part of the album «Virus Propagation», which was posted on the Internet for free downloading.

The bottom of the first reviews were published in the 27th issue of the magazine Nintendo Power, released in August 1991. In her game compared with the previous game Taito - Power Blade, in which the protagonist, lives in a high-tech future, and uses in battle different types of boomerangs, while Kick Master character - a resident of the fairy kingdom, as a weapon - only his own feet and skills in the martial arts. In addition, the graphics and gameplay compared to Kick Master games Low G Man: The Low Gravity Man and GI Joe (play, 1991), published by Taxan shortly before the Kick Master. At the same time, despite the fact that the combination of "magic + martial arts" was used in games before (for example, in the game Ninja Gaiden, published in December 1988), but Kick Master events unfold in the setting, which is more focused on Western culture rather than to the east.
The next 28-th issue of Nintendo Power has published a great review article about Kick Master. In it, in particular, the graphics and sound were evaluated in 3 points (out of five), management - in 3.8 points, interesting - 3.5 points, the atmosphere and the ability to entertain - 3.4 points.
Portal Gaming Sanctuary as the advantages of the game notes the detailed graphics with great design of enemies and bosses, a large number of attacks and techniques, the ability to improve the performance of your character by killing enemies and collecting various items, but notes and disadvantages, and it is not too easy management, not too thought-out system and the use of magic rather overestimated the difficulty for beginners.
The review notes the portal GameFAQs good graphics component of the game, good animation kicks the hero and his enemies (though not all), and a stunning soundtrack. As the deficiencies noted crudity functionality spell (some spell, according to the author reviews, simply do not need), not entirely thought out and tighten control of the game.
A similar opinion was expressed and Jason Hogan, in his review for the portal Nintendo Player. In his opinion, the graphics in the game "just delightful" sound great, but there are some conventions have bad games and animated walking protagonist.
Andy, in his book Slava Video Game Bible said that "detailed background and character animation allocate this side-scrolling fighting game among the majority of these games."