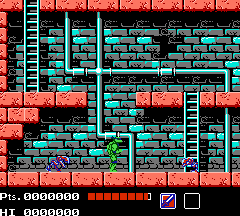 Genre: Action
Perspective: Bird's-eye view, Side view
Visual: 2D scrolling
Gameplay: Arcade, Platform
Published by: Ultra Software Corporation
Developed by: Konami Industry Co.
Released: 1989
Platform: Nintendo (NES)
In 1989, the year when the Teenage Mutant Ninja Turtles were at the peak of popularity, Konami has released a version of the adventure game for young mutants on NES. Get enough platforming varied. At the beginning of each (except the last) level of turtle exploring the area with a view from the top. When you go in the building or in the open hatch, the game is already familiar with the view from the side. Scenery and design are not the enemies tend to the cartoon 1987, and the original comic book, with its dark atmosphere. Character can choose during the game pause menu. Each team member has its own line of health, which allows at any time to change to another beaten turtle, alive and bouncy. The complexity is very high due to heavy management unresponsive animation and furious enemies. But true fans of turtles such inconveniences do not confuse.

START - pause and, at the same time, the choice of that turtle that will continue the adventure;
A - jumps;
B - use of cold weapons (depending on who you play, you can choose a sword, sai, nunchak or six-bo);
SELECT - switch from conventional weapons to throwing or vice versa.

Here, at almost every stage (except the last) there are two modes. In the first, on the streets of the city your heroes really resemble flimsy Lilliputians among the hefty skyscrapers. Meanwhile, the city's intersections are teeming with the deadly scoundrels who are trying to decorate the urban asphalt with their tortoise shells. Dodge these monsters is very difficult, and it is not easy to destroy them. Well at least, that to the desired goal you can go through the tunnels of the sewer system, without going into the subtleties of American traffic rules. That's when you dive into the tempting blackening hatch, the game will go into the second mode and the turtles of the small, slow-moving insects will turn into elusive warriors-shadows.
Depending on who you play, you can choose your own bug different weapons: sword, sai, nunchak or pole pole.
It is useful to compare the capabilities of different types of weapons and options for its use.
Donatello inflicts his most powerful blows on his opponent, deftly eliminates enemies waiting in the ambush, but can only strike directly in front of him, up or down. We advise you to protect this warrior for the most delicate operations.
Although the steel sword of Leonardo is stronger and sharper than the wooden pole, but beats a bit weakly. But one blow Leo overtakes and the enemy, attacking his feet, and the enemy, who was aiming to pierce his forehead (well, in just one stroke seven pobivahom!). And this fighter has good attacks up and down. He can replace Don, but it will take longer to fuss with the enemy.
Michelangelo (nunchuck) and Raphael (sai) have a more modest range of damage, but in a close combat they are not inferior to Leo - they can be fired ahead, into reconnaissance or into a breakthrough.
By the way, besides your main weapon, you now have the opportunity, getting prizes, to provide turtles with shuriken, boomerang or power-charge sets. In this case, your soldiers in a special square shows the conventional designation of available shells and a number of their number is highlighted. Switch from conventional weapons to throwing or vice versa by using the SELECT button.
So, the characters go to meet adventure. Click on START and look at the incomprehensible pattern in the upper left corner. This is the map of the stage. Red rectangles denote land, blue - water barriers, white - mysterious underground hatches and doors of mysterious houses.
At the first stage, you have to defeat the kidnappers April-Rocksteady and Bebop, vainly trying to escape with their victim. After its release, grateful April takes charge of your operation to neutralize the insidious electronic devices (apparently, mines), hidden by the villains in the second stage under the water.
Our ninjas swim more slowly than they walk, but we have to put up.
Relentless is the stopwatch, counting the time left before the disaster, but it can be outwitted. Sacrifice one turtle, trying to turn off as many mines as possible and die among treacherous algae. After this heroic deed, the stopwatch starts counting down the time in a new way, and the work will be reduced.
As soon as the last device is neutralized, the next, third stage will begin. While we were playing underwater hide-and-seek, the Splinter was inexcusably busted and now is in captivity. Let's free the Teacher and put the brave newborns into place! Look, next to you there was a firm minibus, armed with the latest technical innovations of Don. However, sitting in a comfortable driver's seat, remember that this is primarily not a luxury for hunting for enemy soldiers and rinks (button "A" or "Turbo-A"), but a means of destruction ("B" or "Turbo- B ") barriers that closed the way to the boss. So do not forget to go to the house next to which you started the stage, and replenish the stock of missiles. One set is enough ... When it's time to leave the car, press SELECT.
During the last fight we advise you to save energy - you have to beat two bosses in a row.
The liberated Splinter escorts a helicopter with disgraced enemies with a promising glance and sends the disciples to the fourth stage to save our planet from the invasion of zips. Here it is necessary to fairly climb through the dungeons, but it's worth it to admire the giant zip, hiding in the farthest corner. Feed this monster need not chocolate (as in the cartoon), but shuriken, boomerang and all that will turn up under the turtle paw. In response, the monster spits small zipami, shoots from the eyes with lasers and, after each of your hits, roars no worse than a rabid elephant.
After rescuing the Earth from an alien disaster, your team is loaded into the airship and sent to the fifth level to compete with the technodrome.
It is not difficult to get to this base of the Shredder, but we must try to keep the forces of the detachment - the fight is to be serious. Wait until the technodrome removes the protective electric field, then break through to the caterpillars and, standing on them, smash the guns. The vital energy of Mike and Raf is enough to fulfill this point of the combat plan. When the technodrome is rendered harmless, it will easily be made by Leo or Don.
It remains to beat the shredded iron inside this pile of iron Shredder, and the matter will be done. The last stage of the game is devoted to these searches.
Though the technodrome, thanks to your efforts, has come almost completely worthless, the resistance of its defenders will not be easy to break. In the upper left corner, instead of the technodrome plan, there is some kind of not very encouraging inscription shining, but it's hard to go through this stage without cards - you'll stumble on the spikes, then you'll pass by the precious pizza.
‹
›
Home
View web version