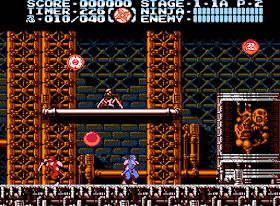 Genre: Action
Perspective: Side view, Top-down
Gameplay: Arcade, Platform, Shooter
Narrative: Martial arts
Setting: Cyberpunk / Dark Sci-Fi
Art: Anime / Manga
Published by: Tecmo
Developed by: Tecmo
Released: 1991
Platforms: Nintendo (NES), Super Nintendo (SNES)
Trequel Ninja Gaiden marked an exciting new storyline. An unknown posing as Ryu Hayabusa, killing a CIA agent Irene. Shocked Ryu sets out to find the killer. Almost all aspects of the game is very much improved. The main character began to look even more lively thanks to the good animation and voice acting. The graphics were considerably revised. Dynamic effects significantly decorate the game, and some of the features of the landscape are here for a reason (for example, quicksand). Gameplay became more varied - Ryu can now strengthen his sword, and special weapons increased. Versions of the game are different for different regions - the Japanese American noticeably lighter, continue as the number of the last course. Ninja Gaiden 3 - worthy end of the cult trilogy on Nintendo.

In this game you need to go through seven levels, which are located on the increase in complexity. The time of each level is limited. You are expected to fight with a huge number of guards and with cybernetic mechanisms. At the end of each stage, a battle with the boss of this level is inevitable. Your hero is endowed with great opportunities. He knows how to skillfully own a ball, jump from any height and move along the steep walls. On the way, you can select different types of weapons, as well as prizes. They are in red balls, which must be cut with a sword.