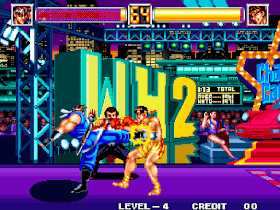 Genre: Action
Perspective: Side view
Visual: 2D scrolling
Gameplay: Fighting
Published by: SNK Corporation
Developed by: ADK Corporation, SNK Corporation
Released: 1994
Platform: Neo-Geo
Continuation of the game World Heroes 2, only with the added word jet. In this part, stronger fighting is visible. Compared to World Heroes (set 1), there are twice as many characters (16 fighters). The graphics are noticeably better. Blurred sprites are almost invisible. Character movement speed increased. This is definitely a plus for the gameplay. Along with the speed of the game, the beautiful techniques of the fighters are well combined, among which there are new ones. In combination with add-ons, the game is over-complicated. To defeat the enemy, you need to try very hard and know all the tricks of your fighter. Arenas can no longer be called boring. On them, in addition to two fighting fighters, you can see watching spectators. Also, the game is equipped with high-quality animated inserts from pictures. You can also note a good soundtrack that fits well into the atmosphere of this fighting game.
‹
›
Home
View web version