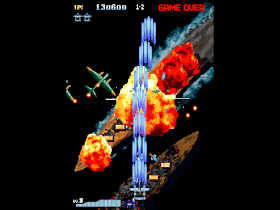 Genre: Action
Perspective: Side view, Top-down
Visual: 2D scrolling
Gameplay: Arcade, Shooter
Interface: Direct control
Vehicular: Flight / aviation
Setting: World War II
Published by: Psikyo
Developed by: Psikyo
Released: 1997
Platform: Arcade Machine
Flying shooter based on the Second World War. Probably the best part of the series. Each of the aircraft available for selection, in addition to the color of the hull, has differences in the color of the shots and its own special attack. A special attack will protect you from enemies in front for a few seconds. There is also a charging attack, if you hold down the fire button. There is even a special level scale on which the strength of this attack depends. For owners of tired fingers, there is a pleasant surprise: the attack button can be held down all the time. It is not necessary to play the game twice, although this will allow you to see the inscription "The End".
‹
›
Home
View web version