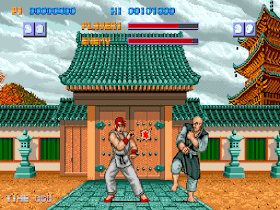 Genre: Action
Perspective: Side view
Gameplay: Arcade, Fighting
Narrative: Martial arts
Published by: Capcom Co.
Developed by: Capcom Co.
Released: 1987
Platform: Arcade Machine
For your attention, Street Fighter, the first game in the SF series, is also the first fighting game released by Capcom.
Here, as in all games in this series, the main players are Ryu and Ken. We have to choose one player and defeat 10 opponents from 5 different countries to pass the international tournament. Each fight is divided into two rounds, for each round there is a specially allotted time for this (30 seconds). In addition to these matches, there are also bonus levels in which you can earn extra points.
‹
›
Home
View web version