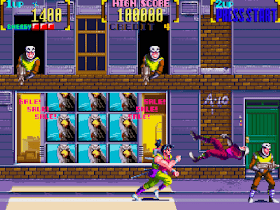 Genre: Action
Perspective: Side view
Visual: 2D scrolling
Gameplay: Platform, Shooter
Setting: Sci-fi / futuristic
Published by: Konami Co.
Developed by: Konami Co.
Released: 1993
Platform: Arcade Machine
This game combines the features of beat'em up and run and gun: from a long distance the character throws shurikens, and from a short distance he hits with melee weapons. Our comrade has been kidnapped and we must save him from the hands of the organization "Skull". The game has something to surprise you - you will have to ride skis, and swim on a raft, and fly on the roof of an airplane. If you have recently taken a vow of abstinence, you should not take a female character, she sometimes takes such seductive poses that all your efforts can go down the drain.
‹
›
Home
View web version