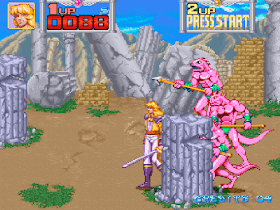 Genre: Action
Perspective: Side view
Visual: 2D scrolling
Gameplay: Beat 'em up / brawler, Fighting
Setting: Fantasy
Published by: Konami Co.
Developed by: Konami Co.
Released: 1993
Platform: Arcade Machine
Konami is known for its bold color palette. Four friends at the call of the goddess go to save the world. Everything is pretty standard here. However, as soon as the character finds the statuette of the goddess, he turns into a bestial mutant! The white wolf, brown bear, panther and goat serve as prototypes for conversions. After the transformation, the hero becomes stronger and faster. It is possible to kick fallen enemies. Two characters initially have weapons (a sword and a log), otherwise the fight is with bare hands and paws. There is running. If we have little health left, the game pleases us with the inscription "Dead Soon" full of optimism.
‹
›
Home
View web version