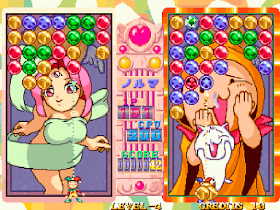 Genre: Action, Puzzle
Perspective: Side view
Visual: Fixed / flip-screen
Art: Anime / Manga
Gameplay: Tile matching puzzle
Published by: Data East Corporation
Developed by: Data East Corporation
Released: 1996
Platform: Neo-Geo
The third part of Magical Drop begins with its no less colorful intro. It reflects all the characters in the game. There are three modes to choose from: puzzle, vs cpu, adventure. The name of each speaks for itself. Animation stages remained at the same level. The original gameplay makes you sit for a long time for this game. The musical accompaniment, as before, is well chosen and only decorates this project.
‹
›
Home
View web version