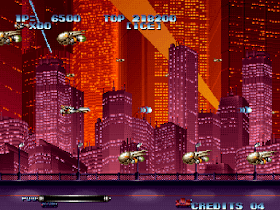 Genre: Action
Perspective: Side view
Visual: 2D scrolling
Gameplay: Arcade, Shooter
Vehicular: Flight / aviation, Space flight
Setting: Sci-fi / futuristic
Published by: SNK of America
Developed by: SNK Corporation
Released: 1992
Platform: Neo-Geo
You control the flying ship of the future. No less fantastical enemies attack you. The flying ship has a special device in its arsenal that helps in the fight against opponents. With it, you can perform more powerful attacks. You can also use various weapon modifications. The game is filled with dark colors. The dim sprites are a little blurry. Small flaws cover up beautiful special effects. The original management makes you get used to yourself. This causes some difficulties in the passage of the game.
‹
›
Home
View web version