King of the Monsters (Neo-Geo) 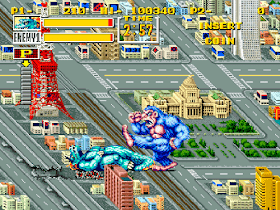 Genre: Action
Perspective: Diagonal-down
Gameplay: Arcade, Fighting
Setting: Sci-fi / futuristic
Published by: SNK Corporation of America
Developed by: SNK Corporation
Released: 1991
Platform: Neo-Geo
This is a rather unusual fighting game. Here you choose one of six monsters and fight with others right in the middle of the city. There are three game modes to choose from: player 1 and player 2 vs computer, player 1 vs computer, player1 vs player 2. Each fighter's moves are more similar to those used in wrestling. The beauty of this fighting game is that you walk through 3D ring-like stages and can destroy everything around. Instead of ropes, fences in the form of electric discharges are used. It can also be used as a method of dealing with the enemy. Management is quite difficult. To get up after falling, you have to quickly press the A button. The graphics of the game have a golden mean. Various stages are filled with bright colors.
‹
›
Home
View web version