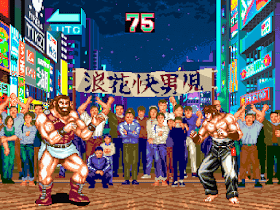 Genre: Action
Perspective: Side view
Visual: 2D scrolling
Gameplay: Fighting
Interface: Direct control
Published by: SNK of America
Developed by: Data East Corporation
Released: 1994
Platform: Neo-Geo
There are thirteen fighters in total. Here the emphasis is more on the fighting style. Despite this, the fighters do not have a lot of tricks. Because of this, the gameplay of the game quickly becomes boring. Blurred sprites are mostly dark colors. The stages do not have high detail, but they can boast of their dynamic effects. The well-chosen musical accompaniment adds depth to the atmosphere of the game.
‹
›
Home
View web version