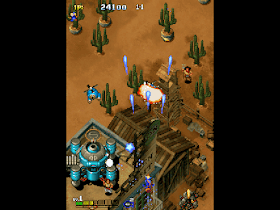 Genre: Action
Perspective: Top-down
Visual: 2D scrolling
Art: Anime / Manga
Gameplay: Arcade, Shooter
Published by: Psikyo
Developed by: Psikyo
Released: 1998
Platform: Arcade Machine
Continuation of the sensational hit in the manic shooter genre. The young witch Marion and the Russian robot (who received a new body) remained with us, Ash was replaced by his niece Tavia, you can also choose an oriental fat man on a magic carpet and even Alucard. The place of the Middle Ages was taken by the wild west. The pirates opposing us are suspiciously reminiscent of the Doronbo gang from the Time Bokan series on PS1, which only adds to the pleasant experience. The graphics and animation of the supers have become even more spectacular. Marion's crown is especially memorable, in which all the surrounding shells turn into sweets and other sweets. As in the first part, each character has his own plot and a couple of endings. When you're playing with two people, the funny dialogues in the scenes between levels can really lift your spirits. Great project.
‹
›
Home
View web version