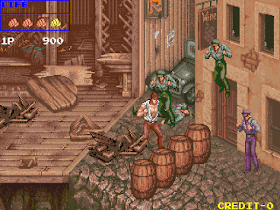 Genre: Action
Perspective: Side view
Visual: 2D scrolling
Gameplay: Beat 'em up / brawler, Platform
Published by: Taito Corporation
Developed by: Taito Corporation
Released: 1991
Platform: Arcade Machine
In the distant twenties of the twentieth century, some poachers caught animals for sale and killing for the sake of skins and tusks. And who will stop this mess? By pure chance (or maybe not), a gang of flayers breaks into one tavern, where our heroes rested - the game begins with this.
And we'll start with the fact that this is a classic arcade beatmap, where the character overcomes the levels, kneads the adversaries to the right and left, and at the end meets the boss. There are four heroes to choose from, each with their own parameters of strength, health and jump. As the level progresses, you will encounter a variety of weapons - firearms, a rocket launcher (yeah, in the 20s, well, well), grenades, sabers, whips, etc. You can also pick up barrels, crates, or rocks and throw them at enemies. This is especially effective against some leaders. Along the way, there will be animals imprisoned in cages, which, after being released, will help you.
‹
›
Home
View web version