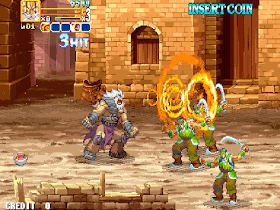 Genre: Action
Perspective: Side view
Visual: 2D scrolling
Gameplay: Beat 'em up / brawler, Fighting
Setting: China (Ancient / Imperial)
Narrative: Martial arts
Published by: Alta Co.
Developed by: International Games System Co.
Released: 2003
Platform: Arcade Machine
The Gladiator is a classic and colorful Beat 'em up in the setting of China at the end of the Song dynasty from the developers of IGS. As in other games from this company, there is also non-linearity here - before the start of the stage, the player is free to choose his own path. Locations here are divided by difficulty.
‹
›
Home
View web version