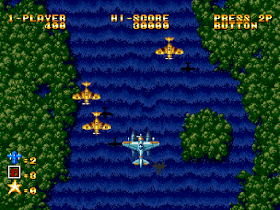 Genre: Action
Perspective: Top-down
Visual: 2D scrolling
Gameplay: Arcade, Shooter
Published by: SNK Corporation of America
Developed by: SNK Corporation
Released: 1991
Platform: Neo-Geo
You are controlled by a plane with a ghost sitting behind it. Before the start of the battle, a choice of one of two types of special weapons is given. Each has its own explosive feature. You are opposed to a variety of techniques. Beautiful stages are endowed with high-quality dynamics. Some objects can be destroyed during the flight. Management seems a little slow. From this it is not possible to destroy all opponents.
‹
›
Home
View web version