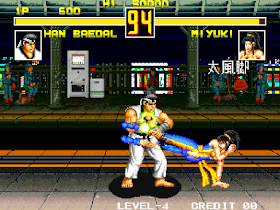 Genre: Action
Perspective: Side view
Visual: 2D scrolling
Gameplay: Fighting
Interface: Direct control
Narrative: Martial arts
Published by: SNK Corporation
Developed by: Viccom
Released: 1994
Platform: Neo-Geo
The theme of this fighting game is slightly similar to that used in Street Fighter. Fighters from different countries gather in order to bring out the best. Despite this, their number is too small. The gameplay of the game is too boring. Player movements look slightly slow. The dynamics of the game noticeably lacks the ability to run. At the same time, each of the fighters does not shine with a variety of beautiful tricks. Fight Fever's graphics are typical of early Neo Geo games. Some stages look too poor as a drawing. There are too few dynamic effects and they are not decoration of the game. The quality of the musical accompaniment also leaves much to be desired.
‹
›
Home
View web version