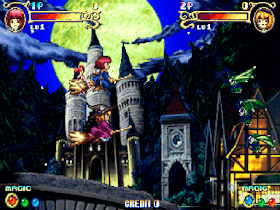 Genre: Action
Perspective: Side view
Visual: 2D scrolling
Art: Anime / Manga
Gameplay: Arcade, Shooter
Published by: Success Corp.
Developed by: Success Corp.
Released: 1997
Platforms: Arcade Machine, SEGA Saturn
Cotton 2 is the direct sequel to Cotton: Fantastic Night Dreams, the game uses the same gameplay mechanics. The player controls Cotton, a little witch who moves using a flying broom, she is accompanied by a fairy named Silk. Cotton 2 also offers the possibility of playing two players simultaneously. A new character by the name of Appli, is also playable in the two-player mode, she is accompanied by the support character Needle, a talking hat. Each has its own peculiarities regarding the types of shots and magical powers. The game controls consist of three buttons: A, B and C. The A button is used in two ways, one for the primary fire by simply pressing the A button, and the other for increasing its movement speed, by now button A.
Similarly, pressing the B button causes the character to grab magic seals and normal enemies on the screen. Cotton 2 offers a novelty by holding the B button, the character can project an enemy on the others if he has caught it just before.
The C button, is the last command, it is used to cast a magic spell according to the equipped elemental crystal. Crystals can be accumulated up to 3 and are represented at the bottom of the screen by colors: blue for the ice shot, red for the fire shot.
Two other elements are also part of the gameplay: the green crystal is used for shots that are imbued with the element of wind, and the yellow crystal is used to increase XP. Experience is used to improve firepower and can go up to level 5.
In addition to the basic controls, Cotton 2: Magical Night Dreams has special techniques, which are more powerful than normal shots. Techniques vary depending on the situation. By combining the left and right arrow keys and the A key, the character performs a tornado attack. By combining the right, left directional arrow and then the A button, the character executes a shot that scatters in three directions in front of him.
The game options allow the player to adjust the difficulty, he can also change the number of lives or even adjust the character's resistance. Cotton 2: Magical Night Dreams consists of six levels whose environments vary and take place at sea, in a cave or in the air with the ruins of a castle floating in the background. Each level includes a mini boss and a boss to conclude the level. The Sega Saturn version of the game features digitized voices if accompanied by a console RAM cartridge.
‹
›
Home
View web version