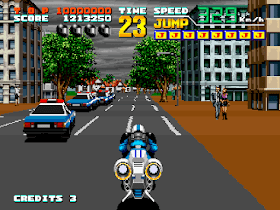 Genre: Action, Racing / Driving
Perspective: Behind view
Pacing: Real-time
Interface: Direct control
Vehicular: Motorcycle, Vehicular combat
Setting: Sci-fi / futuristic
Published by: SEGA Enterprises Ltd.
Developed by: SEGA Enterprises Ltd.
Released: 1989
Platform: Arcade Machine
The future, and now the motorcycle police use air transport to patrol the streets and catch criminals. You are one of these officers, and over the course of several missions you will be chasing various villains in order to arrest them within the allotted time. As soon as all the pawns are captured, the gang leader enters the stage with a significant supply of health and serious weapons. The gameplay is very similar to the famous Chase H.Q.
Along with the usual gas pedal, you have unlimited boosts that provide a short speed boost. If the traffic is heavy, then the bike has the ability to jump, but the jumps are limited and cause more damage to both the criminals and the leader. Blue orbs along the way grant an extra jump point. Contact with the edge of the road will cause the motorcycle to slow down.
‹
›
Home
View web version