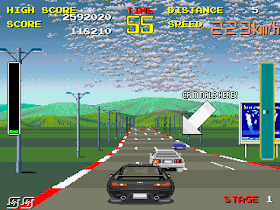 Genre: Action, Racing / Driving
Perspective: Behind view
Vehicular: Automobile
Narrative: Crime
Published by: Taito Corporation
Developed by: Taito Corporation
Released: 1988
Platforms: Arcade Machine, Amstrad CPC
This game tells about the hard everyday life of a policeman and his partner, who, by the will of fate, set off in pursuit of criminals in their Porsche 928 official car.
The goal of the game is quite simple: you need to catch up with the adversary and, periodically ramming, disable his car, avoiding oncoming traffic and entering sharp turns in the process. Having hesitated in the heat of the chase, you can skip the arrow indicating the direction of the turn, turn the wrong way, and then the distance between the criminal and you can greatly increase, the only thing that will help in such a situation is to turn on the turbo acceleration, which can be used only three times per race, but when using it, your car turns into a clumsy brick and oncoming traffic becomes your main enemy. If within 60 seconds, which is exactly how much is given to complete the mission, you fail to stop the criminal, then the car stalls and you are offered to spend one of the three credits that are issued for each mission. Using credit will give you time to continue the chase. But even though the game starts from the same place - the criminal may be at a much greater distance from you than he was at the time the time expired.
The game has 5 levels. On the latter, you will be able to compete with an opponent driving a car of the same model as yours.
‹
›
Home
View web version