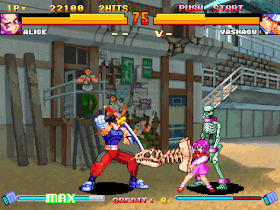 Genre: Action
Perspective: 3rd-person
Gameplay: Arcade, Fighting
Setting: Fantasy
Published by: Fuuki Co.
Developed by: Fuuki Co.
Released: 2000
Platform: Arcade Machine
Asura Buster: Eternal Warriors is a one-on-one fighting game and the sequel to Asura Blade. It offers essentially the same game mechanics from the predecessor.
The story is set three years after Asura Blade. The world's at peace after the death of S. Geist, the main villain of Asura Blade. But now comes a new threat in the form of a yet unknown king who wants to become supreme lord of the world, while the sudden sinking of a whole continent has put the world into a state of chaos. Rising against the king are some of the fighters from Asura Blade together with a bunch of new warriors.
‹
›
Home
View web version