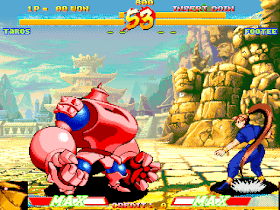 Genre: Action
Perspective: 3rd-person
Gameplay: Arcade, Fighting
Setting: Fantasy
Published by: Fuuki Co.
Developed by: Fuuki Co.
Released: 1998
Platform: Arcade Machine
Asura Blade: Sword of Dynasty is a one-on-one fighting game set in a post-apocalyptic world where fantasy and sci-fi technology exist together. There is a legend of a powerful weapon known as the "Sword of Dynasty", which is said to hold the strongest power in existence and granting any wish desired by the wielder. The Sword of Dynasty has fallen into the hands of cruel and ruthless fighting warlord S. Geist, who seeks to conquer the world by releasing an ancient sealed beast called the Earth Dragon. Eight warriors have set out to find the Sword of Dynasty for their own personal reasons, their paths now crossing in the battles of this game.
Asura Blade plays like many other fighter games of the time, e.g. it borrows the three-button system from SNK's Real Bout Fatal Fury, many different battle tactics from Capcom's Street Fighter Alpha and Darkstalkers series, retreating and advancing, weapon retrieving from SNK's Samurai Shodown, etc. It has a combo system in which moves can be chained into more powerful moves, and then again into specials. It also has its own gauge system, called the Magic Gauge, that a player is able to fill it up through either attacking, being attacked, or using special moves. On maximum level from within the Magic Gauge, players can initiate three variants of super special moves.
‹
›
Home
View web version