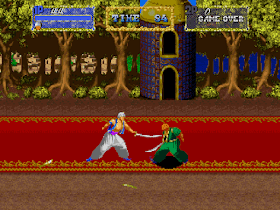 Genre: Action
Perspective: Side view
Visual: 2D scrolling
Gameplay: Beat 'em up / brawler
Published by: Taito America Corporation
Developed by: Taito Corporation
Released: 1992
Platform: Arcade Machine
Despite its rustic appearance, this game based on Arabian tales deserves attention. In addition to standard levels, you will have to fly on an airplane carpet and visit inside a genie lamp. Defeated bosses will be able to help you (summoned as a normal genie). You can play as Prince Lassid, Princess Lisa, Sinbad, and Afshaal. As usual, the character can be changed upon death.
‹
›
Home
View web version