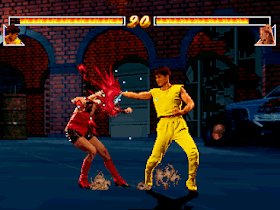 Genre: Action
Perspective: Side view
Visual: 2D scrolling
Gameplay: Fighting
Narrative: Martial arts
Published by: Kaneko
Developed by: Atop
Released: 1995
Platform: Arcade Machine
The gameplay of The Kung-Fu Master Jackie Chan' is similar to other 2D fighting games from that period of history. However, Kaneko seems to take their ideas from the Mortal Kombat game in terms of presentation and finishing techniques.
The player character fights against his opponent in the best 2/3 in a single-player mode against the computer or another player. The player has 6 characters at the start to choose from, each with different fighting styles based on Japanese culture. In single-player mode, after choosing a character, the computer system randomly selects an opponent. The order of the opponents is in any order, leaving one of three ways to finish. Unlike the Mortal Kombat series, some finishing techniques are bloodless and may not damage the opponent.
‹
›
Home
View web version