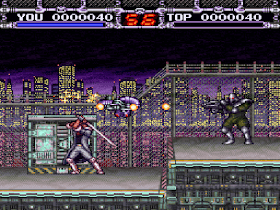 Genre: Action
Perspective: Side view
Visual: 2D scrolling
Gameplay: Fighting, Platform
Setting: Cyberpunk / dark sci-fi, Sci-fi / futuristic
Published by: Activision
Developed by: Fupac, Winds Co.
Released: 1994
Platform: Super Nintendo (SNES)
All cyberpunk fans are recommended to read this work. The game takes place in the near future, in the anarchic year 2097, in which the world economy has been damaged, governments have collapsed, and organized crime has grown like weeds after rain. The game has great cyberpunk music and atmosphere. Yes, and the idea of presenting the legendary sword from fairy tales in the hands of a shabby dusty owner in a decaying, decadent world is also quite impressive. In addition to all this, the game has an excellent storyline. It is a pity that the gameplay is very let down, there is not enough zest, and some of the presented attacks look very protracted. Maybe, if not this component, it would have turned out to be a very good masterpiece of cyberpunk, otherwise the game does not exceed the level of the average in action, except that the atmospheric music makes it at least somehow roam. Boss fights are one-on-one and require an immediate combination of block and attack. They won’t let you linger too much, as time is constantly ticking in the opposite direction, forcing you to take rash steps and senseless attacks. In general, it is very difficult to wield a legendary sword, but it is very interesting in such a world.
‹
›
Home
View web version