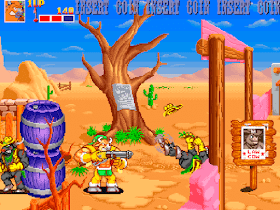 Genre: Action
Perspective: Side view
Visual: 2D scrolling
Pacing: Real-time
Gameplay: Arcade, Shooter
Interface: Direct control
Setting: Fantasy, Western
Published by: Konami
Developed by: Konami Co.
Released: 1992
Platform: Arcade Machine
A game based on the American animated series of the same name by Ryan Brown, one of the creators of Teenage Mutant Ninja Turtles. According to the plot, at the end of the 19th century, a radioactive comet falls on the Great Plains (a plateau in the USA), and everyone who lives nearby soon becomes cowmorphs. In general, the game is very reminiscent of Sunset Riders, the previous creation of Konami: the same wild-western setting, the same action from the side, and the same support for up to four players. The main characters are four cowboys: Cowlorado Kid, Dakota Dude, Marshall Moo Montana and Buffalo Bull.
The game is arranged in the usual way for its genre: several levels culminating in a battle with the "fat" boss, and the next level is chosen by the players themselves, namely the player with the highest score. You have only two action buttons: shoot and jump, although thanks to the combinations of techniques it is enough, including a super attack when you press both buttons at once. From time to time in the levels you find and maybe even manage to pick up power-ups that give your heroes special abilities.
‹
›
Home
View web version