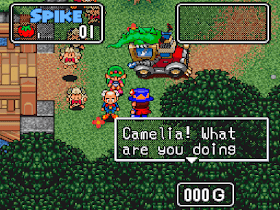 Genre: Action, Role-playing (RPG)
Perspective: Top-down
Published by: Bullet-Proof Software
Developed by: Red Company Corporation
Released: 1994
Platform: Super Nintendo (SNES)
Before you is a very worthy game in the Action RPG genre. She is not like other representatives of this direction on the Super Nintendo. There are many features that make it unique among the many games on this system. A very nice implementation, which may appeal to many. This story takes place on the islands of Vladamasco. One of the rulers, Van Hestler, raised his army and went to war against other kingdoms. The two rulers, Dracuman and Vampra, were quickly captured. However, Vampra's daughter, Camelia, managed to escape. She finds Dracuman's son, Spike McFang, and tells him all the events. The plot will present you with many surprises and twists and turns. There are three types of attacks, this is a dizzying whirlwind, which has a large radius of destruction. But with its active use, the hero can get out of control and become temporarily vulnerable. You can throw a hat, which, like a boomerang, then comes back. It will be possible to buy new types of hats that expand the radius of destruction, which also looks great. During the game, more heroes will join you, but you should not expect much help from them. Special abilities are the use of cards that have the effect of fire, ice, etc. Other types of cards can restore health, allow you to become invisible, move to a safe point during combat, etc. There are a lot of positive moments in the gameplay. Management is not difficult. The music fits well with the overall tone of the game. Other sound effects are unobtrusive. The graphics are quite acceptable. All in all, this is a very enjoyable, fun and revitalizing game. This creation is played easily, and it will disappoint, I think a few. If you are still looking for something to fill your free time and have a good time, then try this game. Recommended to all fans of this genre.
‹
›
Home
View web version