The Age of Heroes: Silkroad 2 (Arcade) 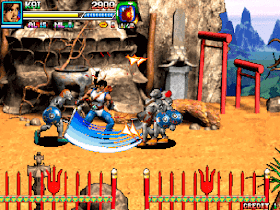 Genre: Action
Perspective: Side view
Visual: 2D scrolling
Gameplay: Beat 'em up / brawler
Setting: China (Ancient / Imperial)
Narrative: Martial arts
Published by: Unico Electronics Co.
Developed by: Unico Electronics Co.
Released: 2000
Platform: Arcade Machine
The Age of Heroes is a non-linear beat em up in a fantasy setting, which was released only on arcade machines.
One of four characters is given under control: aarrior Chamuku, fighter Kai, wizard Shenmue and assassin Shue.
The combat system differs from other representatives of the genre in a large number of consumables (magic) and the ability to attack opponents simply by jumping on them. After completing the level, the player can use the money collected from enemies to purchase several energy, which are lost when they lose.
‹
›
Home
View web version