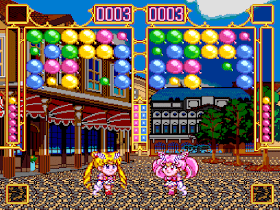 Genre: Puzzle
Perspective: Side view
Visual: Fixed / flip-screen
Pacing: Real-time
Gameplay: Tile matching puzzle
Published by: Bandai Co.
Developed by: Tom Create Co.
Released: 1995
Platform: Super Nintendo (SNES)
We select one of the anime heroines, then we shoot at the balls appearing from above. On the "up" button you can speed up their appearance. At the beginning, the ball appears in a deflated form, with the first shot we inflate it, and with the second - we burst it. At the same time, all inflated balls of the same color that are next to it (in a straight line) burst. By blowing up a group of balls, you will throw stones into the distribution to the opponent. Each ball, burst separately, increases the strip of magic on the left, with half the energy, you can remove the top row of balls, and with full energy, you can make a powerful spell that will either help us or harm your opponent.
‹
›
Home
View web version