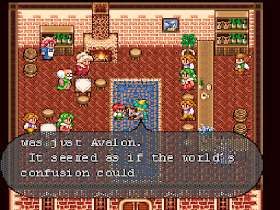 Genre: Role-playing (RPG)
Perspective: Top-down
Pacing: Turn-based
Setting: Fantasy
Published by: Square Co.
Developed by: Square Co.
Released: 1993
Platform: Super Nintendo (SNES)
During the course of the passage, the player controls the members of the royal family of Avalon. Unlike the previous Romancing Saga, where all eight main characters are available at once, here the narrative progresses from one to another over several generations. Each time an old emperor's life comes to an end, a young successor can be chosen from four candidates based on the deeds performed during gameplay. At the same time, up to five heroes can be in the active squad, as soon as the life points of one of them run out, he loses one life and may die altogether - in this case, he cannot be revived and returned to the team, he disappears from the squad forever.

The central place of the plot is occupied by the legend of the seven great warriors, who in ancient times managed to defeat absolute evil and thereby bring peace to the world. However, after many years, people again begin to unleash wars, the harmony of the world is violated, and a threat looms over civilization in the face of seven evil demons. The ruler of the Avalon empire is trying to overcome evil, but he cannot cope with this task during his life, so his glorious work is continued by his many descendants of future generations.
‹
›
Home
View web version