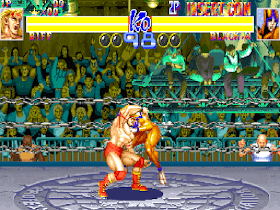 Genre: Action, Sports
Perspective: Diagonal-down
Visual: 2D scrolling
Gameplay: Fighting
Sport: Wrestling
Published by: Capcom Co.
Developed by: Capcom Co.
Released: 1994
Platform: Arcade Machine
Continuation of fighting-like wrestling. The pace of the game has increased significantly, a greater emphasis is placed on the fighting part, it's a pity that now there is no way to go outside the ring. Another departure from the canons of wrestling is the absence of a tag team match, where there was the possibility of a two-on-two fight. The number of moves has also undergone a significant change, because now you have as many as 5 buttons in your asset, due to which it has become more convenient to fight. The wrestlers have doubled, now there are 14 of them, and you need to fight each one in a special way. The ring has grown significantly in size and has become more diverse. Graphically, practically nothing has changed, except for a little: a few special effects have been added and nothing more.
‹
›
Home
View web version