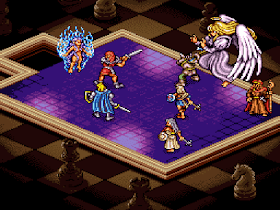 Genre: Role-playing (RPG)
Perspective: Diagonal-down
Visual: Isometric
Art: Anime / Manga
Pacing: Turn-based
Setting: Fantasy
Published by: Kadokawa Shoten Publishing Co.
Developed by: Thinking Rabbit
Released: 1995
Platform: Super Nintendo (SNES)
One of several games based on fantasy novels by Ryo Mizuno. This version does not follow the events of the text works, but is devoted to important episodes from the history of Lodoss: the battle of six heroes against the demonic god. The prologue shows six heroes at the center of the confrontation. Flaus, priestess of Valis slain in action. The hero Beld summons demonic forces in anger to defeat the god. But when the battle ends, so do the heroes... The game starts with Karla the Grey Witch, one of the six heroes who finds herself in a strange place without her magical powers. After completing Karla's scenario, we study the stories of other heroes, and finally find out what happened to all of them. Record of Lodoss War is made in the manner of all kinds of Japanese role-playing games. Battles are strategic. Characters can acquire unique abilities. Recommended to all fans of Japanese games, many consider it one of the cult games of the Land of the Rising Sun.
‹
›
Home
View web version