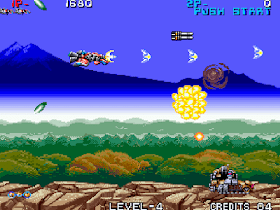 Genre: Action
Perspective: Side view
Visual: 2D scrolling
Gameplay: Arcade, Shooter
Setting: Sci-fi / futuristic
Published by: NMK Co.
Developed by: NMK Co.
Released: 1994
Platform: Neo-Geo
A game of the frequent shooting / fly genre. After passing it, the player will have a lot of pleasant impressions. Before the start of the battle, you need to choose one of the three players and a variety of ammunition for the aircraft. And now, after some adjustments, the battle begins against no less equipped opponents. The gameplay of the game is immediately breathtaking and contributes to an instant surge of adrenaline. Zed Blade is a very dynamic game. She doesn't let the player relax for a second. Flying around the planet, you will have to destroy more than a dozen enemies. A variety of bosses amaze with their scale. The whole game is built on beautifully rendered special effects. Among other things, a well-chosen musical accompaniment stands out, which fits well into the atmosphere of the game.
‹
›
Home
View web version