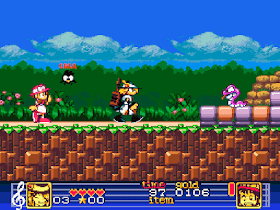 Genre: Action
Perspective: Side view
Art: Anime / Manga
Gameplay: Platform
Published by: Enix Corporation
Developed by: Daft Co.
Released: 1995
Platform: Super Nintendo (SNES)
A game based on the popular manga from the author Michiaki Watanabe. One day, demons invade Staccato and begin to sow terror among the inhabitants. It's all because of the weakened barrier that kept evil creatures from penetrating the world of people. The queen who supported him for many years exhausted herself. The attack on the people was organized by Hell King Bass, who wants to free the supreme leader of Kestra. The game turned out just right! Using the power of his music, the protagonist plays the violin to destroy the bad guys once and for all. The gameplay combines very perky humor and deserves the highest ratings. Some may know what kigurumi is. It's kind of like a fancy dress. There are several games that mention this element of Japanese culture. And this game is just that. The main character himself does not have to dress up in masquerade costumes - although this pleases. But his girlfriend Flute will have to sweat on this occasion (it's hot in a suit). But each outfit gives her new abilities, such as the ability to fly or jump high. Therefore, at almost every level, you will have to change two or three suits. However, Flute's troubles don't end there. The protagonist uses her as a human shield, as a ladder, and also uses her as a cannonball. It is quite versatile and you always need to reach the end of the level with it, otherwise you will have to return. As for audio and video: Both of these categories are excellent. All in all, a very unique and fun game that is not forgotten for quite some time. For the Year of the Dragon, a group of translators from Chief-Net presented a gift in the form of a Russian translation of this wonderful toy! Let me remind you that for the first time the ability to deal with enemies with the help of musical instruments appeared in the 1985 game Bard's Tale.
‹
›
Home
View web version