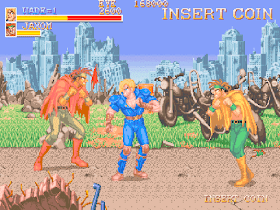 Genre: Action
Perspective: Side view
Gameplay: Arcade, Beat 'em up / brawler
Setting: Sci-fi / futuristic
Published by: Konami Co.
Developed by: Konami Co.
Released: 1993
Platform: Arcade Machine
If Capcom has Cadillacs & Dinosaurs, then Konami has Violent Storm. Despite the terrible name, a very fun and relaxed atmosphere awaits us in the game. The villain kidnapped the girl, and three brave friends go to rescue her. In addition to standard moves, each character has a dash forward and two throws. Super hits can be performed on the move, for example, Wade (blond) can do a pinwheel while flying forward, like Ken from Street Fighter. Bright colors and characteristic humor complete the idyllic picture. Especially the game will appeal to those who were born in the 80s and 90s, as the musical accompaniment perfectly reflects the music of that time.
‹
›
Home
View web version