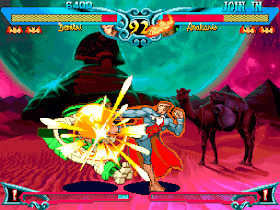 Genre: Action
Perspective: Side view
Visual: 2D scrolling
Art: Anime / Manga
Gameplay: Fighting
Interface: Direct control
Setting: Contemporary, Fantasy
Narrative: Horror
Published by: Capcom Co.
Developed by: Capcom Co.
Released: 1997
Platform: Arcade Machine
Absolutely identical to Vampire Hunter 2: Darkstalkers Revenge, because after all, it was done at the same time. One, albeit insignificant, but still there is a difference - the same "The Lord of Vampire" - Jedah and some characters associated with the storyline. Compared to the last part, three were replaced: J. Talbain, Sasquatch and Rikuo, who were replaced by representatives of Vampire Hunter 2: Donovan, Pyron and Phobos. Also good graphics. No difference in reception is observed. There are also several modes in the game: in addition to normal and accelerated, there are also auto and auto / accelerated. In general, one principle follows: why change something that is already flawless.
‹
›
Home
View web version