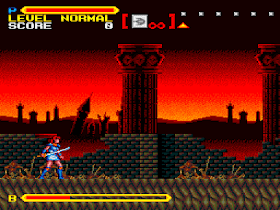 Genre: Action
Perspective: Side view
Visual: 2D scrolling
Art: Anime / Manga
Gameplay: Platform
Published by: Telenet Japan Co.
Developed by: Shin-Nihon Laser Soft Co.
Released: 1992
Platform: Super Nintendo (SNES)
The next adventure of the heroine of the popular Valis series is dedicated to all fans of female warriors. Finally, the series has risen to a new level, gaining seriousness and militancy in the general atmosphere, something that was not in the various versions on the Genesis. In the game, you need to quickly run forward, actively use the sword and pick up a variety of things along the entire battle path. The combat action is very energetic and in many ways resembles the legendary Ninja Gaiden series, except that the pressure of the enemies is much less. Perfectly implemented fantasy world with unique locations and a variety of backgrounds. The musical accompaniment also perfectly combines the above-mentioned fantasy and combativeness. You shouldn't linger too much on the levels, as the life energy of the bosses increases with every moment spent. Headlong running forward, probably, will not work either, so you will have to combine all the presented passing techniques, study the enemies placed in the locations, the various weapons available and the behavior of all the bosses. Good game for one player.
‹
›
Home
View web version