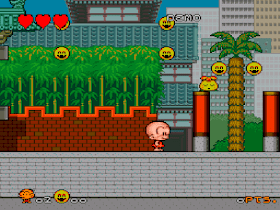 Genre: Action
Perspective: Side view
Visual: 2D scrolling
Gameplay: Arcade, Platform
Published by: Hudson Soft Company
Developed by: A.I Co.
Released: 1994
Platform: Super Nintendo (SNES)
Pretty fun platformer. Your hero is a peanut (sometimes such), who has an extremely strong skull, is able to crawl along walls and even bite into them, and also at times, if he swallows a suitable piece of food, turns into a powerful and extremely evil character. There are also many hidden and bonus stages in the game. Single player game.
‹
›
Home
View web version