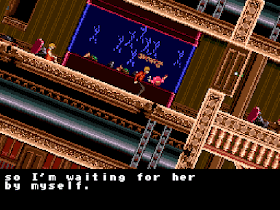 Genre: Action
Perspective: Side view
Visual: 2D scrolling
Gameplay: Arcade, Platform, Puzzle elements
Setting: Interwar
Published by: Vic Tokai
Developed by: Human Entertainment
Released: 1994
Platform: Super Nintendo (SNES)
The game is an English translated version of the Septentrion game. You are a passenger of a ship in distress. As the script says, there is only one step from ecstasy to tragedy. There are more than 2,000 passengers on board who could die. You are given a choice of 4 characters who are supposed to be able to save the people and the team. The game is made in the walker/quest genre and is recommended to everyone who is not afraid of difficulties.
‹
›
Home
View web version