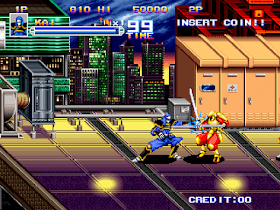 Genre: Action
Perspective: Side view
Visual: 2D scrolling
Gameplay: Beat 'em up / brawler
Setting: Sci-fi / futuristic
Published by: Technos Japan Corp.
Developed by: Technos Japan Corp.
Released: 1993
Platform: Arcade Machine
The game tries to combine beat'em up and fighting: each hero has a large arsenal of moves, and during the battle with one enemy, others modestly wait for their turn. Each of the characters (except the red wrestler) has both bare-handed attacks and melee weapons. Between levels there will be one-on-one mini-battles, where you will be offered a training battle for an enemy character. Try to master at least one, because after defeating the final boss, you will need to defeat the enemy in this mini-level, otherwise you won’t see a good ending.
‹
›
Home
View web version