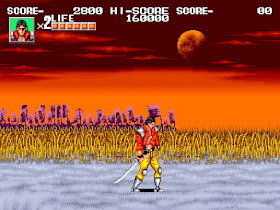 Genre: Action
Perspective: Side view
Visual: 2D scrolling
Gameplay: Beat 'em up / brawler
Setting: Cyberpunk / dark sci-fi, Fantasy
Published by: SNK Corporation
Developed by: SNK Corporation
Released: 1991
Platform: Neo-Geo
Evil from the past descended on the earth. Your task is to destroy it. Collecting various magic balls, the main character uses various attacks. You can play both alone and together. In addition to fighting for your world, you will have to teleport to ancient Japan (during the time of the samurai). Here your task is to correct the past. In ancient Japan, you will participate in large-scale battles of that era. The protagonist does not move in one plane, but in a three-dimensional one. In addition to using various types of weapons, the character of the game can transform into a dog by using a magic ball.
‹
›
Home
View web version