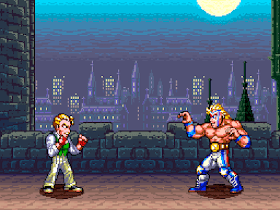 Genre: Action
Perspective: Side view
Visual: 2D scrolling
Art: Anime / Manga
Gameplay: Fighting
Published by: Culture Brain
Developed by: Culture Brain
Released: 1994
Platform: Super Nintendo (SNES)
This game features 15 fighters. They are all quite individual. There is a military man, a savage, an Egyptian mummy and even a lion. The plot again slips past a person who does not know Japanese. But in principle, everything is clear. Good and evil again bludgeon each other. It's happened hundreds of times already. This game has everything that should be in a fighting game: various punches and kicks, super punches, bundle combos. The implementation of all this is pretty good. The artists have tried. All the characters look quite charismatic, the arenas are beautiful. But everything moves a little slowly. Graphics and sound are good.
‹
›
Home
View web version