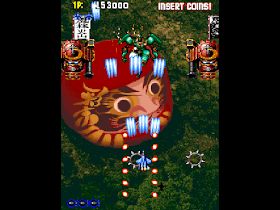 Genre: Action
Perspective: Top-down
Visual: 2D scrolling
Gameplay: Arcade, Shooter
Interface: Direct control
Vehicular: Flight / aviation
Setting: Japan (Ancient/Classical/Medieval)
Published by: Banpresto Co.
Developed by: Psikyo
Released: 1993
Platform: Arcade Machine
The vertical predecessor of the mighty Tengai. Aircraft are still being used, of which there are as many as six pieces. The most original - the first girl. The series combines the ideas of the Japanese Middle Ages and the combat vehicles of the future. As usual, there is a super-attack ("bombs") and special. attack (for it you need to hold down the shot button). Each character has their own ending. The second round starts automatically, it is characterized by increased difficulty, but after it only the standard inscription "The End" awaits you, so if you liked the game, it's better to start over with another character after the first round. Joy for a quick mind and swift fingers.
‹
›
Home
View web version